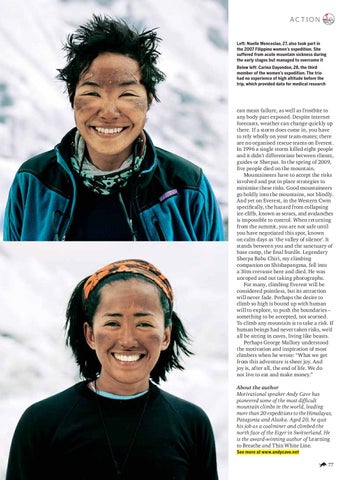 can mean failure, as well as frostbite to any body part exposed. Despite internet forecasts, weather can change quickly up there. If a storm does come in, you have to rely wholly on your team-mates; there are no organised rescue teams on Everest. In 1996 a single storm killed eight people and it didn’t differentiate between clients, guides or Sherpas. In the spring of 2009, ﬁve people died on the mountain. Mountaineers have to accept the risks involved and put in place strategies to minimise these risks. Good mountaineers go boldly into the mountains, not blindly. And yet on Everest, in the Western Cwm speciﬁcally, the hazard from collapsing ice-cliffs, known as seracs, and avalanches is impossible to control. When returning from the summit, you are not safe until you have negotiated this spot, known on calm days as ‘the valley of silence’. It stands between you and the sanctuary of base camp, the ﬁnal hurdle. Legendary Sherpa Babu Chiri, my climbing companion on Shishapangma, fell into a 30m crevasse here and died. He was unroped and out taking photographs. For many, climbing Everest will be considered pointless, but its attraction will never fade. Perhaps the desire to climb so high is bound up with human will to explore, to push the boundaries – something to be accepted, not scorned. To climb any mountain is to take a risk. If human beings had never taken risks, we’d all be sitting in caves, living like beasts. Perhaps George Mallory understood the motivation and inspiration of most climbers when he wrote: “What we get from this adventure is sheer joy. And joy is, after all, the end of life. We do not live to eat and make money.” About the author Motivational speaker Andy Cave has pioneered some of the most difﬁcult mountain climbs in the world, leading more than 20 expeditions to the Himalayas, Patagonia and Alaska. Aged 20, he quit his job as a coalminer and climbed the north face of the Eiger in Switzerland. He is the award-winning author of Learning to Breathe and Thin White Line. J\\dfi\Xknnn%Xe[pZXm\%e\k 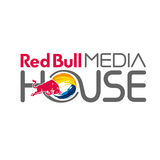