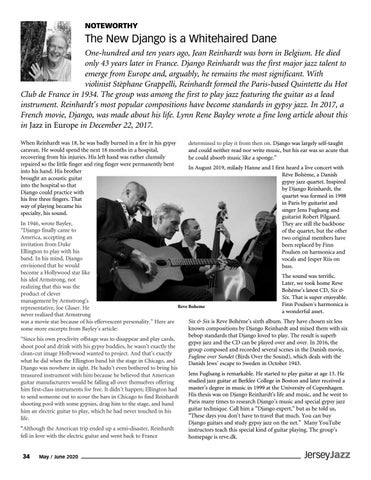 The New Django is a Whitehaired Dane One-hundred and ten years ago, Jean Reinhardt was born in Belgium. He died only 43 years later in France. Django Reinhardt was the first major jazz talent to emerge from Europe and, arguably, he remains the most significant. With violinist Stèphane Grappelli, Reinhardt formed the Paris-based Quintette du Hot Club de France in 1934. The group was among the first to play jazz featuring the guitar as a lead instrument. Reinhardt’s most popular compositions have become standards in gypsy jazz. In 2017, a French movie, Django, was made about his life. Lynn Rene Bayley wrote a fine long article about this in Jazz in Europe in December 22, 2017. When Reinhardt was 18, he was badly burned in a fire in his gypsy caravan. He would spend the next 18 months in a hospital, recovering from his injuries. His left hand was rather clumsily repaired so the little finger and ring finger were permanently bent into his hand. His brother brought an acoustic guitar into the hospital so that Django could practice with his free three fingers. That way of playing became his specialty, his sound.

determined to play it from then on. Django was largely self-taught and could neither read nor write music, but his ear was so acute that he could absorb music like a sponge.” In August 2019, milady Hanne and I first heard a live concert with Rêve Bohème, a Danish gypsy jazz quartet. Inspired by Django Reinhardt, the quartet was formed in 1998 in Paris by guitarist and singer Jens Fuglsang and guitarist Robert Pilgaard. They are still the backbone of the quartet, but the other two original members have been replaced by Finn Poulsen on harmonica and vocals and Jesper Riis on bass.

In 1946, wrote Bayley, “Django finally came to America, accepting an invitation from Duke Ellington to play with his band. In his mind, Django envisioned that he would become a Hollywood star like The sound was terrific. his idol Armstrong, not Later, we took home Reve realizing that this was the Bohéme’s latest CD, Six & product of clever Six. That is super enjoyable. management by Armstrong’s Finn Poulsen´s harmonica is Reve Boheme representative, Joe Glaser. He a wonderful asset. never realized that Armstrong Six & Six is Reve Bohéme’s sixth album. They have chosen six less was a movie star because of his effervescent personality.” Here are known compositions by Django Reinhardt and mixed them with six some more excerpts from Bayley’s article: bebop standards that Django loved to play. The result is superb “Since his own proclivity offstage was to disappear and play cards, gypsy jazz and the CD can be played over and over. In 2016, the shoot pool and drink with his gypsy buddies, he wasn’t exactly the group composed and recorded several scenes in the Danish movie, clean-cut image Hollywood wanted to project. And that’s exactly Fuglene over Sundet (Birds Over the Sound), which deals with the what he did when the Ellington band hit the stage in Chicago, and Danish Jews’ escape to Sweden in October 1943. Django was nowhere in sight. He hadn’t even bothered to bring his Jens Fuglsang is remarkable. He started to play guitar at age 13. He treasured instrument with him because he believed that American studied jazz guitar at Berklee College in Boston and later received a guitar manufacturers would be falling all over themselves offering master’s degree in music in 1999 at the University of Copenhagen. him first-class instruments for free. It didn’t happen; Ellington had His thesis was on Django Reinhardt’s life and music, and he went to to send someone out to scour the bars in Chicago to find Reinhardt Paris many times to research Django’s music and special gypsy jazz shooting pool with some gypsies, drag him to the stage, and hand guitar technique. Call him a “Django expert,” but as he told us, him an electric guitar to play, which he had never touched in his “These days you don’t have to travel that much. You can buy life. Django guitars and study gypsy jazz on the net.” Many YouTube “Although the American trip ended up a semi-disaster, Reinhardt instructors teach this special kind of guitar playing. The group’s fell in love with the electric guitar and went back to France homepage is reve.dk.